The journalist walked from one artisanâ€™s shop at Alaba Rago, Lagos, to another in search of a workman that could repair his imported Compaq laptop bag which he so much cherished. He was directed to the slummiest part of the slum known as Alaba Rago. All kinds of dirt and fouled waste water dominate the place. Smoke emitting from cooking, meat and fish grilling activities filled the whole environment and flies swarmed everywhere. Anyone who is not used to such condition could easily choke to death from the smoke. If you survived, the horrible odour of smoke that clings on your clothes wonâ€™t let go until you wash the clothes. 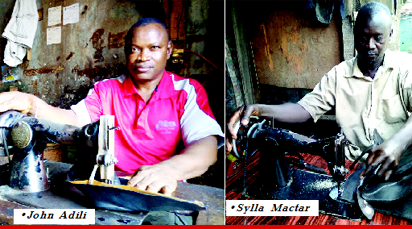 Inside and outside squalid shops, men worked: bags, footwears, belts, boxes, etc. The journalist approached one of the men, Sylla Mactar, a Senegalese. He was so quiet and soft-spoken. Sylla was sewing a bag with a sewing machine. â€œSir, can you repair my laptop bag?â€� the journalist asked.

â€œBut you canâ€™t make new one of this my Compaq laptop bag.â€�

â€œHe can make it. Even better,â€� the only apprentice Sylla has, Aminu, said.

â€œYou can make new one of this?â€� the journalist asked turning to Sylla.

â€œEven better,â€� Sylla repeated what Aminu said. â€œBut it will be pure leather, not cloth like that.â€�

â€œThen make it with cloth so that I wonâ€™t have to pay so much.â€�

â€œWe work with leather only. No cloth or rubber, it is waste of time and skill,â€� Sylla said.

To test Syllaâ€™s skills, the journalist gave N10, 000 advance payments. When Sylla finished the laptop bag, the journalist could not believe it. Truly, it turned out to be better than the imported Compaq one.

Next shop near Sylla is John Adili, who makes footwears of all kinds. John also works with leather only. He, too, made sandals for the journalist â€“ sandals better than those made in Italy!

John and Sylla are artists in their own right. Their works fall into the handicraft category, more precisely expressed as artisanal handicraft or handmade. Products of arts and crafts are useful and decorative objects made completely by hand or by simple tools.

There is a certain fascination to leather. First, leather is durable. Then, it has aesthetic values, and products made of real leather speak of high quality. When bags, footwears, belts, wrist watch straps, glass cases, Bible covers, and many other personal items are artistically made of real leather, they stand out, bear the marks of quality and stand the test of time. These are the areas where Sylla and John specialise.

John, Sylla and many others like them who work with leather are addicted to leather. So also are those who patronise the products of their creative endeavour. When they take your order, you need not fear whether they would use real leather or synthetic leather, given that it is not always easy to differentiate between the two at sight. Their obsession to real and high quality leather is your guarantee. Even when you request that your job be done with synthetic leather, â€œSorry, sir, we work with only leatherâ€� is always the reply. And real leather it must be.

Animal skins, the source of quality leather, abound in Nigeria. Nigeriaâ€™s Sokoto red goat skin is said to be one of the worldâ€™s best and attracts huge demand by global fashion houses. Developed countries, especially Italy, are major consumers of Nigerian leather.

According to reports, â€œNigerian leather is still mainly used in the production of shoes and bags, resulting in thriving local production and exportation to the West African region, yet, the country still imports about $500 million worth of leather products annually.â€� Arts and craftsmen like Sylla and John who insist on best leather qualities are among those who patronise imported leathers.

Unfortunately, Sylla and John have only one apprentice each, which shows that not many people are willing to learn their skills, even though the two craftsmen cannot fill the deluge of orders they get from customers. While unemployment is squeezing life out of the nation, the arts and crafts industry in Nigeria, one of the major drivers of every economy, is left untapped.

Recently, an IMF research investigated why Chinaâ€™s economy has done so well. The research team reported thus: â€œAlthough capital accumulation â€“ the growth in the countryâ€™s stock of capital assets, such as new factories, manufacturing machinery, and communications systems â€“was important, as were the number of Chinese workers, a sharp, sustained increase in productivity (that is, increased worker efficiency) was the driving force behind the economic boom. Between 1979 and 1994, productivity gains accounted for more than 42 per cent of Chinaâ€™s growth and by the early 1990s, had overtaken capital as the most significant source of that growth. This marks a departure from the traditional view of development in which capital investment takes the lead. This jump in productivity originated in the economic reforms begun in 1978.â€�

Arts and craftsmen such as Sylla and John who dot the country need support. John told Vanguard Arts & Reviews that he first learned how to repair footwears before graduating to making brand new ones, and that he has been on the job for 10 years. With his one apprentice and simple hand tools, he makes about five pairs of footwears a day. But with more workers and better machines, he could produce up to 25 pairs a day.

Sylla does not like the environment where he works. â€œThis is not the right place to do this type of work, because what we do here are quality works.â€� He would prefer to move to a more decent environment in order to attract more workers and customers.

Both Sylla and John desire to pass their crafts and skills to as many people as possible, but unfortunately, where they are is so hidden and squalid, and Nigerian government, which makes empty and endless promises of job creation, is not interested in them and what they do, at all.

How Hurricane-Impacted Schools Are Positioning Themselves as Places of Comfort for...

The Road To Intersect: Aline Lerner Talks About Increasing Diversity In...

Without Buhari, APC will stop working in 2023– MBO Planner

‘No shortcuts to a more healthy world’: WHO chief units out...

What I want I ‘d understood prior to pertaining to Durham

States Await Suggestions from Betsy DeVos on Most Current Submission of...