Peruvian Lawmakers have accepted the resignation of President Pedro Pablo Kuczynski, paving the way for Vice President Martin Vizcarra to succeed him and hold office until 2021. 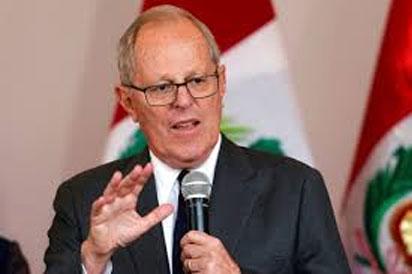 The motion was approved by parliament in a 105-12 vote, with four abstaining, Andina news agency reported.

In the approved resolution, lawmakers simultaneously said they rejected the grounds Kuczynski gave for stepping down, according to El Comercio newspaper.

The president had accused the main opposition Popular Force (FP) party of constant â€œattacksâ€™â€™ that had created a â€œclimate of in governability.â€™â€™

Kuczynski announced his resignation on Wednesday, on the eve of a second impeachment vote.

The move came after videos were published that allegedly showed some of Kuczynskiâ€™s allies trying to bribe a legislator to vote against the impeachment.

The liberal economist leader survived a first impeachment vote in December, after he was accused of â€œpermanent moral incapacityâ€™â€™ for allegedly lying about his contractual relationships with Brazilian construction company Odebrecht.

The presidentâ€™s problems started in December 2017, when Odebrecht said it had paid nearly 8 million dollars to two consulting companies linked to Kuczynski before and after he served as economy minister and prime minister under president Alejandro Toledo between 2004 and 2006.

After initially denying the accusations, Kuczynski admitted to having had business relations with the Brazilian company, which has confessed to paying nearly 800 million dollars in bribes in 12 countries, 10 of them in Latin America.

Honda endeavors into entry level SUV in Nigeria with HR-V

Performance Squared and the Plan Difficulty

25 Scholarships To Utilize To By The End of May

Start Your Profession with The Firm

Itâ€™s Never Too Late to Become an Entrepreneur