By Abdulwahab Abdulah and Jane Echewodo
The Chairman, Presidential Advisory Committee Against Corruption (PACAC), Prof Itse Sagay, SAN, Tuesday called for the re-introduction of the jury trial system to fight corruption in the country. 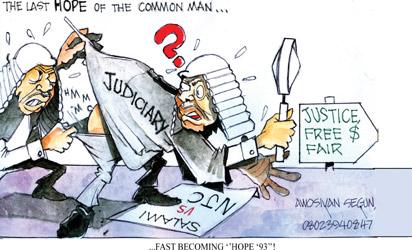 Aside Sagay, others in support of the call which was made at a symposium on “Salvaging Nigeria’s Criminal Justice System: The Jury Option” include Professor of law, Taiwo Osipitan,SAN, Chairman, House of Representatives Committee on Justice, Mr Razak Atunwa, Acting Chairman of the Economic and Financial Crimes Commission (EFCC), Ibrahim Magu.

The event was put together by the Nigerian Bar Association (NBA), Ikeja Branch Human Rights Committee in collaboration with The Jury Justice and Rectitude Advocacy Initiative.

Sagay argued that justice, particularly in corruption cases cannot be successfully disposed off in the country unless ordinary laymen and women are legally empaneled to decide the guilt or innocence of persons charged with crimes of bribery and corruption.

The law professor in his opening remarks as chairman, argued that he came to this conviction after coming out of the shock that enveloped him following judgment of the courts on corruption charges against some Judges.

He lamented that in recent years, a lot of evidence have established that some judges cannot be relied upon to uphold the integrity of the judicial system.

Sagay said, “After my recovery from the shock, it dawned on me that legal knowledge could make judges prone to legal technicalities, creating a barrier between technical law and justice”.

He noted that the usual excuses for huge deposits in judges’ account are “marriage of judges daughters, death of judges relations like father, mother, auntie, uncle” among others.

Sagay said he supported the abolition of the jury system in 1976 by the military because he believed that laymen could easily be influenced or subjected to other people’s interest and instructions and that a judge, more likely would uphold the integrity of the judicial system among other reasons.

To buttress his positions, he cited the judgment in case of a judicial officer charged with corruption, adding that the judgement in the matter showed that there is es spirit de corps among the judges.

Prof Osipitan, after a detailed explanation of the jury trial system and how it operates in some countries around the world , suggested that it should first be introduced in relation to capital offences in selected economically viable states.

Osipitan who delievered the keynote paper at the occasion, also suggested introduction of special bar and special bench for the system to work in the country.

He said however observed that the jury trial system can only be effective in country with a mostly efficient and up to date data of its citizens.

“Foremost, Nigeria must first update its database system. The National Identity Card database and INEC database might be very helpful if the decision is to introduce jury trial in criminal cases”, he stressed.

Magu who was represented by Seidu Atteh said the commission would accept any trial system that would assist it in fighting corruption cases successfully.

Earlier in her welcome address, the chairman of human rights committee of NBA Ikeja, Mrs Carol Ibharuneafe said the theme of symposium was necessitated by the fact that society has not been aware of the inadequacy of the criminal justice system.

Ibharuneafe pointed out that with high profile cases amongst public officers, the lapses in the law has been exposed and necessitated review to make it work for our society.

Although there have been suggestions from various stakeholders, she said the facts remain that whether special or more courts, they will still be presided by only one person, the judge.

” Given the high propensity of some of our judicial officers to be compromised, those suggestion may achieve little or nothing, hence jury option”,

L’Oréal-UNESCO For Ladies in Science Sub-Saharan Africa Program 2019 (As Much...

‘Dispersed Quality’ – A design for European HE