Before Monday, last week, Emmanuel Ugwuanyi was a successful wholesaler and hotelier in Kasuwan-Magani, a bustling semi urban settlement 30 kilometers away from Kaduna city on the busy Kaduna-Kachin highway. He owned one of the best watering holes in the town and was the biggest wholesaler of alcoholic drinks. ButÂ  within three hours, his investment of over six years were reduced to ashes. He lost a truck that he purchased barely a week earlier for N3.8 million; he also lost about N6 million in cash, being sales that he made over the weekend which his manager had planned to deposit in the bank in near-by Kaduna city, that fatefulÂ  Monday. 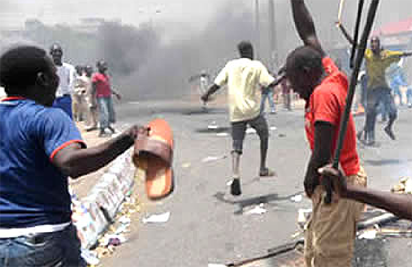 WhenÂ  SundayÂ  Vanguard met him in the ruined remains of his once bubbling shop, Ugwuanyi, who hails from Enugu, was a distraught and an obviously inconsolable man. â€œI cannot believe that my investment just went up in flames because of no fault of mine. I am a victim of a violent disagreement over romance. It is very painful,â€� he toldÂ  SundayÂ  Vanguard while fighting back tears.

So, what actually triggered the violence? Investigations byÂ  SundayÂ  Vanguard indicated that though tension between the majority Christian population and the minority, economically more empowered Muslims had been simmering for a while, what served as a trigger was the decision of Christian youths in the area to discipline Christian girls who were found to be dating Muslim boys, against the â€œdecreeâ€� passed by the Christian youths.

One of the â€œpunishmentsâ€� prescribed by the Christian youths against any Christian girl found to be dating any Muslim guy is 20 lashes of the cane.

According to the chairman of the Christian Association of Nigeria in the area, Rev. Makama Danjuma, â€œI was away to Kaduna when I received a call that there was tension in Kasuwa Magani. I rushed back and I was ambushed by some young men – obviously, these were Muslims. Some of them said I should be killed but majority of them rejected the idea because, according to them, there was no need for the trouble in the land. I went round to dissuade people from making trouble.

But before this issue, there had been a problem. I was called by the chief of Kajuru on a SundayÂ  for a meeting. When I went, I saw a lady in Hijab. He told me that I was invited as the chairman of Christian Association of Nigeria because the lady I saw in Hijab wanted to convert from Christianity to Islam and as the leader of Christians, I needed to be informed. I told him that I was not going to be part of it. I told him that he should allow me to hold a meeting with the girl and her parents before they go ahead with the planned conversion but he insisted so I left.

â€œThis is one problem that has lingered, the issue of Muslim guys dating Christian girls and to worsen the case, they would be boasting that â€˜we will sleep with your mothers and your daughters and you cannot do anything because we have the economic wherewithal to do soâ€™. It is this provocation that is at the root of this latest crisisâ€� he said.

Though purveyors of violence in the area tried to give it a religious slant, what happened was more of an economic crisis, with an economically less empowered group resisting what they saw as an oppression by an economically advantaged group, that just happened a different religion.

According to Ugwuanyi, what happened was mere criminality that people used religion to justify.

â€œI have been doing business here for six years. There is nothing like religious crisis because it is criminal gangs who are made up of Christians and Muslims. The people who burnt this place went straight to my managerâ€™s room because they know that that is where money is kept. I lost over N7 million because we did not go to the bank for three daysâ€� he said.

The Kaduna State Police Commissioner, Austin Iwar, who led a security team to the area for an assessment vowed that no stone will be left unturned to identify perpetrators of the violence and bring them to book.

â€œIt is unfortunate. As we can see the level of destruction is very high, some people were killed and properties were destroyed. This is not what we wished for our state, Kaduna. Â  Let me say that we will not leave any stone unturned in investigating the remote and the immediate causes of this problem. We will talk to the stakeholders here and try to find out what the problem is and through civil problem-solving approach and conflict resolution, we will deal with that. We will also look at the criminal aspect of it. So far, we have arrested 18 people that we suspect were involved in the crisis. We are working round the clock to ensure that we get to the root of the matter. We have recovered a number of dangerous items, including petrol bombs. We believe this is a planned thing and we will get to the root of the matter. We will do a thorough investigation to ensure that it does not happen againâ€� he said.

Though peace has been restored in the area, as long as the root cause of the crisis is papered over, there is no guarantee that some criminals may not resort to religion to wreak havoc on innocent people. The security agencies must work hard to ensure that those who use religion to perpetrate violence are brought to book.

Boost your job prospects or do what you love? How to...

Developing the Next Generation of Business-Minded Global Health Leaders

Does she think I’m too old for her?