Many travellers and commuters were on Saturday stranded in Onitsha, Anambra, following the closure of the Asaba end of the Niger Bridge for several hours for the conduct of Local Government elections in Delta.

Newsmen reported that the Anambra Government had earlier, through a public service announcement, warned travellers about the curfew imposed in Delta which started on Friday night. 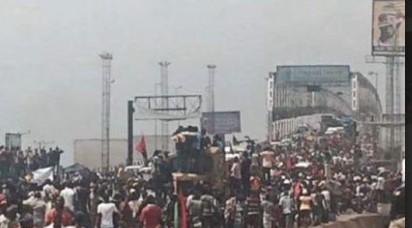 However, travellers from within and outside the state, who took chances, were disappointed when they got to the Onitsha end of the bridge.

Newsmen further reports that the restriction order caused huge vehicular and human traffic on the ever busy Onitsha express way.

Mrs Joy Egwuatu, a traveller from Awka to Lagos, expressed disappointment at the development, saying she was not aware of the election and the public announcement.

â€œSuch announcement should have been made several says before the election rather than just one day pre-notice,â€� Egwuatu, who was returning after the Christmas and New Year celebration, said.

â€œYou know, the road was shut down due to the election in Delta like it was done during the governorship election of Nov. 18, 2017 in Anambra.

â€œDue to pressure, we had to press for the reopening of the route before 3.00 p.m.

â€œAs you can see now, we have controlled the traffic and the road is free now,â€� Ajayi said.

Meanwhile, an unconfirmed source said a pregnant woman travelling to Lagos suddenly went into labour during the long wait and was quickly attended to by other women.

The source said the woman was delivered of her baby during the emergency and was later taken to a hospital for proper attention.

Ijaws and the rest of us in Edo

The Perfect Playlist for Anybody on Valentine’s Day

Former NIMASA DG faults report of his conviction by court