By Vincent Ujumadu
Awka- POOR budgeting practice has been identified as one of the problem militating Nigeriaâ€™s economy.

A lecturer at Nnamdi Azikiwe University Business School, Professor Emma Okoye, who spoke yesterday on the forthcoming 2nd edition of Dr. Emmanuel Egbogah Budget Roundtable being organized by the school, observed that improper budgeting was the bane of the countryâ€™s economy, arguing that proper budgeting would help to put the economy on a sound footing. 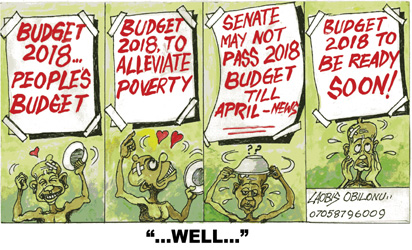 He explained that it was for that reason that the Unizik Business School, through the annual budget roundtable assemble professionals from the public and private sectors to brainstorm on the proper ways for planning and articulation of budget. This yearâ€™s exercise, he said, would take place on May 7, 2018.

According to him, the former deputy governor of the Central Bank of Nigeria, CBN, Professor Kingsley Muoghalu, would speak on the theme, â€œBudget Implementation: The Political Economy of Resource Allocation, while the Secretary to the Anambra State Government, SSG, Professor Solo Chukwulobelu, would be the chairman.

Other speakers include the deputy governor of Anambra State, Dr. Nkem Okeke, the director of UNIZIK Business School, Professor A.U. Nonyelu and a public affairs analyst, Dr. Okey Ikechukwu.
Okoye also said that captains of industry, as well as experts from within and outside the country were expected at the one event.

Okeoye said: â€œThis budget roundtable will help the people of the South East and South â€“South geo-political zones get the required exposure and boost their economies.

“The prolem our people have is that they do not plan well when it comes to budget planning and we want to help them in capacity building.