Leicester City extended their unbeaten run on Saturday with a draw at Stoke while struggling West Brom’s winless run stretched to nine league matches against 10-man Huddersfield, cranking up the pressure on manager Tony Pulis. 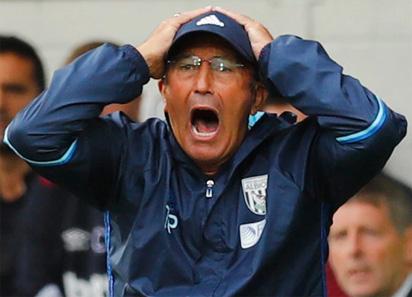 With five of the top six sides not in action until Sunday, the focus was on the battle lower down the Premier League table before Liverpool were due to kick off in the late match against struggling West Ham.

In the early game, former England striker Peter Crouch came off the bench to rescue a point for Stoke City in a 2-2 draw, denying new Leicester manager Claude Puel another victory after he won his first match at the helm against Everton last week.

The 2015-16 Premier League champions are now unbeaten in six games in all competitions after early season struggles but will be disappointed they twice let their lead slip and in the end were indebted to goalkeeper Kasper Schmeichel, who made a fantastic flying stop in the dying seconds.

“I am happy with the attitude of my players, it was a good game, good intensity and passion,” said Puel.

“We had a lot of chances today. It is difficult to accept one point but Kasper saved well at the end so then OK, we take a point. It is an encouraging game which is important for the future.”

Huddersfield’s Rajiv van La Parra broke the deadlock in their home match against West Brom, lighting up a match devoid of real quality with a stunning strike on the stroke of the interval.

West Brom, struggling for goals, have not won a Premier League match since mid-August and remain just two points clear of the relegation zone, with Pulis’s proud record of never being relegated under threat.

Huddersfield were forced to play for more than half an hour with 10 men after Christopher Schindler was shown a second yellow card, prompting three substitutions from Pulis but the visitors failed to force an equaliser.

Elsewhere, Sean Dyche’s Burnley extended their impressive unbeaten away record with a 1-0 win at Southampton courtesy of a late Sam Vokes strike to move up to sixth in the table.

Burnley, with three wins and two draws, have already won more games and points on the road than they amassed in the whole of 2016-17, when they garnered just seven points.

Brighton earned three points at struggling Swansea with a first-half goal from Glenn Murray and a Steve Cook strike in added time gave Bournemouth a 1-0 win away at Newcastle.

West Ham will take on Liverpool in the late evening kick-off on Saturday, with Alex Oxlade-Chamberlain in line for a first league start after his move from Arsenal and West Ham desperate for points to pull away from danger.

On Sunday, leaders Manchester City host Arsenal while second-placed Manchester United travel to Chelsea, with both sides needing a win to stay on the coattails of Pep Guardiola’s team.

2020 Leventis Fellowship for Nigerians to study at the University of...

How Being an “Formality” Children Impacts Your College Experience

#MakeItRight: A campaign by UN Lebanon and TBWA/Raad on World Environment...

UK to allow driverless cars on public roads in January