Mohamed Sarwat is a professor of computer science at Arizona State University. He recently participated in a Quora session where he answered questions on Computer Science trends and how to navigate higher education when pursuing a career in CS. Read our highlights from the session below:

Do self-taught programmers struggle more than those with undergrad or graduate degrees at work?

Not necessarily! However, I have to say that holding a computer science degree is becoming a requirement. I would also go one step further and claim that the tech titans such as Google, Facebook, and Amazon prefer to hire individuals who hold a graduate degree in computer science.

Some areas where I think individuals who don’t hold the formal CS degree might struggle with are data science and AI. The reason is that such areas require that the individual masters several sub-areas, which are not easy to learn on your own without an advanced degree. For example, a data scientist needs to:

(1) be proficient in one or more high level programming languages like C/C++ and Java as well as major scripting languages such as Python and R.

(2) be able to manage, maintain, and retrieve data stored in large-scale data databases. Hence, learning SQL, as the most widely-used query language, is also becoming a must.

(3) be able to test various hypotheses on data. She cannot do that without a solid understanding of statistical terminologies such as Mean, Standard Deviation, P-value, and the Null Hypothesis…

(4) be able to build a machine learning model on the input data to predict new unseen patterns. Some of these skills can be acquired through online courses. However, I recommend that you enroll in online courses that are part of a planned degree that is offered by an R1 research institute (e.g., MIT, UIUC, ASU). For instance, the Master of Computer Science offered by ASU both on campus and online via Coursera has a big data systems concentration, in which student learn subjects like SQL, distributed and parallel data processing, statistical machine learning, and data visualization.

How will the tech job landscape change over the next 10-20 years?

Jobs in technology evolve at a staggering rate. The software engineering process companies followed ten years ago is quite different to what software companies use these days. The required skills have also radically changed. For instance, in the past, a programmer who did not know C/C++ would struggle to find a job in a major tech company. Currently, you can be hired as a programmer in a software company to just develop scripts using languages like Python, Matlab or R (statistical Language).

Job titles like Data Scientist and Big Data Engineer did not exist ten years ago. Recently, I have witnessed even job postings for Machine Learning Engineers and AI Engineers. In other words, tech companies these days hire individuals who possess more than just programming skills. A data scientist, besides being a good programmer, needs to have good knowledge of statistics and machine learning algorithms. In the future, I would not be surprised if we had job titles like Autonomous Car App Developer, Blockchain Developer, Smart City App Developer… That is why I would emphasize the importance of continuing to learn cutting edge technologies so that you can keep up with the pace of change. For instance, The Master of Computer Science offered by ASU both on campus and online via Coursera offer data science, artificial intelligence, and big data courses that keep up with such cutting edge technologies.

What MOOCs and self-teaching tools would you recommend to people who are new to computer science?

There are a plethora of computer science courses offered online either on Coursera, Youtube, or other online learning tools. However, I recommend that you enroll in online courses that are part of a planned degree that is offered by an R1 research institute.

For instance, I would recommend the Arizona State University Online Master in Computer Science degree, which is offered through Coursera. When you enroll in a formal degree program, you typically have a more well-designed curriculum, which can make it significantly easier to both absorb and fully understand the material. In addition to that, you’ll complete your coursework with an MCS under your belt; that credential definitely helps with the job hunting process.

What are some career paths for a Computer Science major?

Software engineering and programming jobs represent the typical career path for a computer science major. Nonetheless, careers in computer science evolve at a staggering rate. Job titles like Data Scientist and Big Data Engineer did not exist ten years ago. I can still see growth in data science jobs in the upcoming decade. To be prepared for such jobs, a data scientist needs to master four main skills (consider the pie chart below): 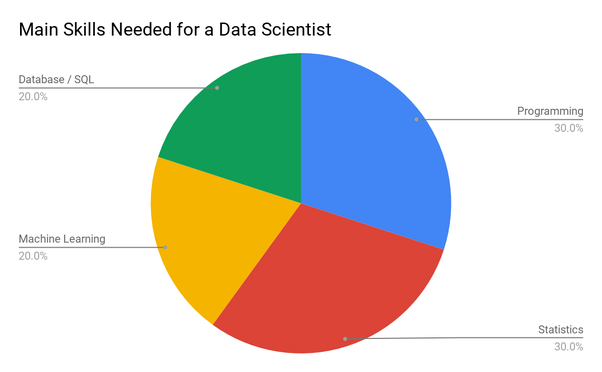 Recently, I have witnessed even job postings for Machine Learning Engineers and AI Engineers. In the future, I would not be surprised if we had job titles like Autonomous Car App Developer, Blockchain Engineer, Smart City App Developer…That is why I would emphasize the importance of continuing to learn cutting edge technologies so that you can keep up with the pace of change. Mastering all such skills cannot be easily achieved without academic guidance. Hence, pursuing a Master’s degree in data science / big data as part of a prestigious computer science program (such as the one at MIT, ASU, and Stanford) may make the learning journey easier.

These questions originally appeared on Quora – the place to gain and share knowledge, empowering people to learn from others and better understand the world.

Apply for your Master of Computer Science from Arizona State University or start earning credit toward your degree with one of the courses below:

The post Navigating Technology Trends with a Master of Computer Science appeared first on Coursera Blog.

Africa Initiative for Governance (AIG) Scholarships 2021/2022 for Masters Study at...

24 Hours of Football for Charity