BY Boluwaji OBAHOPO
Lokoja – Governor Yahaya Bello of Kogi State has lampooned critics of President Muhammadu Buhari, saying they do not have the ultimate power to stop the President in next year’s general elections. 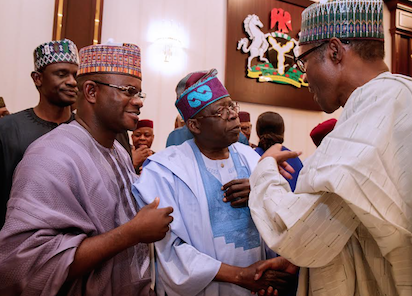 Bello pointed out that no campaign of calumny against Mr. President would frustrate his re-election, more so that he has the overwhelming support of Nigerians to continue in office, in view of his transparent leadership and desire to move the country to another level of development.

Bello statement was in reaction to former President Olusegun Obasanjo’s letter where he asked Presidential Buhari not to seek reelection in 2019.

Bello who spoke in Lokoja on Tuesday evening at the Infrastructural Expo to commemorate the second anniversary of his administration, wondered why the Peoples democratic Party PDP which plundered the resources of the country would still be contemplating returning to power, saying that can never happen.

He said, “God who made Mr. President to pass through the valley of death preserved him for a purpose. The confidence is certain that President Buhari would secure another mandate in view of his purposeful leadership.

“Mr. President is just close to three years and his opponents are running helter-skelter, because they cannot tolerate him for eight years. By the time President Buhari completes his two terms in office, his opponents would be in political wilderness.

“President Buhari is doing well in his best in the fight against corruption, insurgency as well as improvement in the economy. The foreign reserve has been bolstered significantly compared to what was in place before he came on board in 2015.

“Mr. President is boiling them with cold water, suffocating them because they cannot stomach him for eight years, that is why they are crying foul. When the time comes they will know that majority of the people of this country are solidly behind him. So those who are against the reelection of President Muhammadu Buhari cannot stop him”, he emphasised.

Bello further opined that God had endorsed Buhari to serve his constitutional two terms, and so, does not need the support of anyone to achieve that feat, “Those who ran the country aground are desperately seeking relevance, trying to play God.

“No amount of intimidation, media manipulation and campaign of calumny can compel Mr. President to abandon his avowed commitment to put the country on the path of greatness, neither can the current efforts at retrieving all the stolen monies from the nation’s coffers cannot be abandoned because of some selfish individuals.”

Bello who said his own political aspiration will be taking care off by God when the time comes, also lamented that many of the National Assembly members from the state will not be fortunate to return to the Green or Red Chambers.

“It is quite lamentable that all the members of the National Assembly from the state have not done enough to adequately protect the interest of the state. But I can assured that in 2019 only those that are prepared to do the needful would be elected to the National Assembly; to support Mr. President in his determined efforts to put the country on sound economic pedestal.”
End

Restructuring: Osinbajo speaking from both sides of his mouth – Ijaw...