ABUJA — Over 1000 protesters, yesterday, besieged Abuja office of Amnesty International, AI, over what they described as plot to destabilise Nigeria.

The protesters who brandished various placards, alleged plans by Amnesty International to release a report they said would portray the Nigerian Army and Civilian JTF fighting Boko Haram insurgents in the North-East, as routinely detaining, starving, raping and killing women and minors.

Coordinator of the protest, Mr. Danesi Momoh, told newsmen that participants were members of various civil rights groups in the country.

According to him, “this is the beginning. We will continue to occupy Amnesty International until it gets out of our country. With the tenacity the NGO has shown in its bid to destroy Nigeria, we will not pull back like we did the last time. We have had enough of its destabilizing lies and we say Amnesty International must leave now.”

He said the decision of Amnesty International to only base its report from 2015 to 2018, was suspicious. 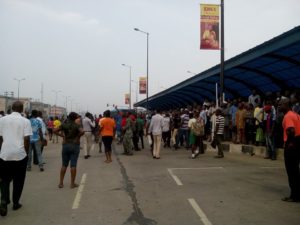 Meanwhile, the Nigerian military, yesterday, said it had received credible intelligence report of a plan by AI to release a false report on fictitious rape incidents in IDPs camps in the North East region of Nigeria.

The Defence headquarters in a statement signed by Brigadier-General John Agim, Acting Director, Defence Information, said: “This malicious trend by AI is becoming a frequent ritual and it is rather unfortunate.

“In times like this, Amnesty International is expected to apply the natural law of liaison by working with security agencies as partners.

“This would have been the best way to ensure that insurgency and crisis are completely wiped off rather than engaging in falsehood, maligning the military and painting her in bad light at any slight opportunity.”

“The Nigerian Military wishes to use this medium to reiterate her commitment to the citizens of our dear nation, that it will abide by all Human Rights Regulations as entered into by Nigeria and also go the extra mile in ensuring that the territorial integrity of our nation is well protected. “However, the Nigerian Military admonishes AI to desist from cooking reports from time to time to demoralize the entire military system and the nation as a whole whose troops are sacrificing their lives in the fight against Boko Haram and other enemies of the country. Agim added, “These false reports which are capable of derailing the good work being done by our patriotic and selfless soldiers must stop. “Kindly note that we are not in any way implying that AI should not do their job, but such must be done with a level of integrity and credibility by seeking clarification when the need arises. “This way a lot will be achieved as both will form partners in the fight against extremism and other vices. “The Defence Headquarters therefore, urge all law abiding citizens to continue to trust and support the military in the ongoing war against Boko Haram and go about their normal lawful business.” END

, saying: “This confirms that whoever is financing its operations in Nigeria is angry that the tide was turned against their Boko Haram agents since the current political and military leadership took over the helm of affairs in 2015.

“It is sickening that Amnesty International can now be using its report to praise the dark era when cities, as far as Kogi State, were under siege from Boko Haram terrorists.

“The AI used its so-called report to discredit the findings of other investigations that absolved the government and military of all blames while stating that the rules of engagement in military operations were professionally followed.”

“The import of this unbecoming posture is that Nigeria is permitted to only exist and function at the pleasure of Amnesty International.

“This international organization lied that people are being victimized, especially when they are perceived to be connected to Boko Haram and that the military was indiscriminately killing those who remained in their homes.

“It lied that its ghost researchers documented hundreds of thousands of deaths. The horrendous lies are so many that one is constrained to be searching for a single strand of truth in the entire document.”

Momoh urged the Federal Government to consider request Civil Society Organizations made last year for AI to be kicked out of Nigeria.

“Civil Rights Groups at this march are willing to provide legal assistance to the government prosecution team to secure convictions of those that have used reports, doctored reports, to strengthen Boko Haram”, he added.

FEBE International Undergrad Scholarships at the University Of Newcastle In Australia,...

UNN Updated Academic Calendar for 2017/2018 Session is Out