The police in Mushin, Lagos have raided the hideouts of suspected criminal in Akala area leading to the seizure of bails of Indian hemp hidden in Bibles, fruits and bags valued at N80million. 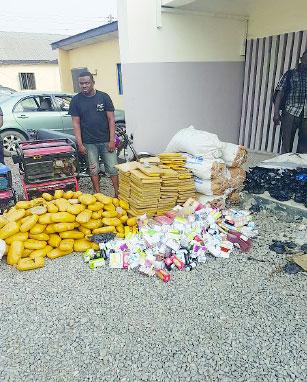 During the raid carried out by a combined team of the Divisional Police Officers of Mushin Area Command, several shanties allegedly used as hideouts by criminals were destroyed.

A source told Sunday Vanguard that the Area Commander, Area D, Mushin, ACP Akinbayo Olasoji, led the DPOs under his jurisdiction for the operation.

The source added that investigation was ongoing to unravel those behind the Indian hemp.

Dance your socks off for charity

If you’re heading for university, which account can you rely on?

Delicious Food at the Moon Market

Cops rescue 3 from abductors in Kogi

June 12: A democracy day and its intrigues

Day in the life of a Classics trainee

Day in the Life of a Second-Year Psychology Trainee

Court sentences man to 6 years in prison for stabbing brother...