From girls in rural Afghanistan, to children in immigration detention on the US-Mexico border, to grandmothers fleeing war in Sri Lanka, throughout my career working on childrenâ€™s rights, Iâ€™ve heard firsthand the importance that education has for families and their children, even in the midst of the most desperate circumstances. These families expect their children to be able to access a quality education, and they have a right to do so.

In light of this, I welcome the launch of the new Global Education Monitoring Report, especially its focus on accountability, which is a key element in building equitable and quality education systems.

This blog explores how civil society can work to increase accountability, drawing on my experiences at Human Rights Watch, with the Global Coalition to Protect Education from Attack, and as a human rights lawyer.

How can civil society hold governments accountable for education?

There are a number of methods that civil society can use, including monitoring, reporting, and advocating for change.

Monitoring government performanceâ€”ensuring they deliver on their promises

Independent civil society organizations like Human Rights Watch can review government commitments and compare that with the reality faced by children. While, globally, primary and secondary school enrollment numbers have improved significantly, many governments are still failing to guarantee education for all children. Human Rights Watch has termed this the â€œeducation deficitâ€�: meaning the shortfall between what governments have committed to do and what children experience in education.

Almost all governments annually report on their progress towards their global development goals, but these are often based on government macro data, which may not show whatâ€™s really happening at the local level and who is being denied their right to education. For example, in South Africa, which has been a leader in promoting education and reported that it had reached universal primary education in 2015, we found that there were more than half a million children with disabilities out of school that year.

Civil society organizations can go deeper by conducting their investigations, going to the most remote villages or under-served slums or townships. We talk with children, with teachers, with government officials, and anyone else who has information. We then verify that information, and contrast what weâ€™ve documented and observed with what governments report.

Our investigations in more than 30 countries have identified significant barriers affecting students, including:

Reporting findings to a wide audience 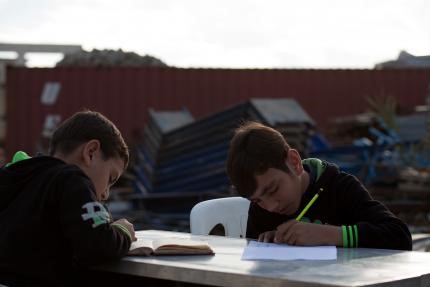 Waâ€™el, 13, and Fouad, 7, originally from Idlib, Syria, study outside their home in Jounieh, Lebanon. Their mother, Kawthar, 33, struggled to enroll them in school, and eventually withdrew them due to concerns about the quality of education and transportation costs of US$80 per month. Â© 2016 Bassam Khawaja/Human Rights Watch

In addition to monitoring governments, civil society organizations need to report out what they find. This includes to the public, so that they can use the information to mobilize and hold their governments to account; to international accountability mechanisms; and of course to government officials themselves, who can use information to make changes. In this, the media is an important partner as their reach is often much greater than NGO reports. However, the media is changing: threats include a reduction in funding for international reporting, a loss of public trust, and government censorship. There are also a number of new opportunities for civil society groups to interact directly with the public, particularly with young people, through the rise of social media.

The GEM Report mentions NGO reports, or shadow or parallel reports, submitted to UN treaty bodies as mechanisms for holding governments to account. Human Rights Watch regularly writes parallel reports and parliamentary submissions and we have been glad to see that information frequently considered when we do.

For example, UN treaty bodies have helped to highlight attacks on schools and military use of schools in countries where these practices occur. Following our regular reports, the UN Committees overseeing child rights, economic, social and cultural rights, and discrimination against women, plus the Inter-American Commission on Human Rights have called out more than 10 countries, including Kenya, India, Saudi Arabia, and Pakistan, for their practices and called on them to protect students, teachers and schools. Two bodies have specifically mentioned the Safe Schools Declaration in five country situations.

Finally, civil society should advocate for change, not just for more funding but for policies that reduce the education deficit. For example, after civil society groups drew attention to the problems facing Syrian children while attempting to get an education in Jordan, the Jordanian Education Ministry ordered schools to register Syrian children even when they lacked the government-issued â€œservice cardsâ€� that were previously required to enroll and which many Syrian families could not get. The education ministry also lifted a ban on school enrollment for students who had been out of school for more than three years.

Accountability for education needs to reach across the entire government, not just Ministries of Education. This is something the GEM Report emphasizes: accountability must include identifying who is responsible. This could include, for example, Ministries of Defense who station troops in schools or Ministries of Interior whose refugee registration policies prevent refugee parents from registering and, therefore, taking their children to school without fear of arrest. At the same time, the fact that several parts of government are responsible for children not being in schools should not be an excuse to pass the buck.

The GEM report also emphasizes that donors and international mechanisms must be accountable for their aid commitments. International aid remains an essential part of global progress in education, especially in conflict-affected regions or in countries that go through protracted natural hazards. Human Rights Watch has urged donors for Syrian refugee education to be more transparent in reporting the delivery and timing of aid, and urged host countries to fix bottlenecks, lift restrictions that undermine Syrian childrenâ€™s access to school, and collect better enrollment data.

How can civil society be more effective?

To better hold governments and other actors to account and secure justice for those excluded from education, civil society organizations should strive for better coordination and partnerships across disciplines: this includes human rights and child protection groups, as well as education specialists. This may require joining forces to push back against government threats to independent civil societyâ€”as government threats against groups in Tanzania challenging the presidentâ€™s ban on schooling for pregnant girls and teen mothers so aptly highlights.

With 264 million children and young people still out of school, ending the education deficit means ensuring every child has a quality primary and secondary education without the financial and systemic obstacles many face today. Funding is important, but too often we see policy decisions by governments that maintain or even create the education deficit. Civil society has a crucial role to play in supporting progress in education, including by holding governments to account for tackling the numerous abuses that keep children out of school.

The requirement for action in an age of scholastic scams

The Partnership Schools for Liberia: A critical analysis

Of Obasanjoâ€™s red card to Buhari and Its effects beyond Buhari...